1927. As twilight ends, you check your pocket watch again. The soles of your Wingtips tap hurriedly along the brick streets and paved sidewalks down Oak Street. By now, the street lights and neon signs have been switched on to light your way.

You tip your hat as you pass neighbors and friends, and free your hand from your pocket to greet more familiar faces through the windows and open doors of buildings. Cigarette smoke and sounds of laughter pour into the street and join the bustling city outside. It’s dark now. Dusk seems miles away, as Saturday night begins.

As you meet the end of Oak Street, you cross 5th Avenue between Model T’s and other jaywalkers to pass Hotel Pinehurst beside the theatre. You nervously check your watch one more time, even though you are five minutes early. As you look up, you see her. Under the light of The Arabian sign are many people socializing as they await showtime, yet she remains alone. She catches your eye and smiles.

The Arabian Theatre opened April 1, 1927 with much excitement from the citizens of Laurel. The investors were Charles Green, Ben Schneider, and Sank Taylor, along with the Saenger Brothers Amusement Company out of New Orleans, Louisiana.

The theatre showed silent films until the 1930s.  Reuben DeGruy was the first manager of the Arabian, and his wife Ruthie entertained the audiences on the theatre’s “Mighty Wonder Organ”.

The design from The Arabian came from Emile Weil’s architect firm, the same firm for all Saenger theaters. Arabic, Egyptian, Persian, and Moroccan styles all inspired the interior design and architecture. At the time, all of these styles were very popular and pretty standard in many architectural designs. This was because of the deep interest in the Eastern part of the foreign world that was attributed to the discovery of King Tut’s mummy in 1922.

Laurel Little Theatre bought The Arabian in 1977 and made an $80,000 renovation to the building. The lobby and auditorium remain original, but the proscenium arch and stage were built in 1977. The Egyptian winged ‘sun phoenix’ was first featured on the back wall of the theater, but was placed on the arch during the renovation. 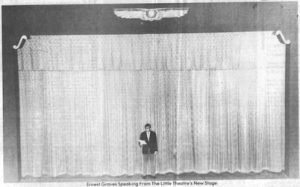 The theatre doesn’t show movies anymore, but features many plays and musicals every year. Many actors and actresses have performed in the theatre, including some you may have seen on TV.

Laurel Little Theatre is a deeply loved and historic landmark in our city. We are so happy to have a performing arts theater in our town, and appreciate it’s immense and ongoing contributions to our community.

Also, this month is The Arabian’s 90th birthday! To celebrate, the theatre is holding a 1920s themed movie night and costume party this Saturday, April 8, 2017 at 7:30 PM. Drinks and hors d’oeuvres will be served, and the very first movie projected in The Arabian will be shown again! Be sure to make plans to see “It” starring Clara Bow, and enjoy a night back in time. Call 601.428.0140 for more information on tickets.

*A very special thank you to Wess Hughes, the LLT historian, for his contribution of historic information. (All photos courtesy of the LLT website)

Don’t forget to sign up in the gold box for email updates so you can be the first to know every time we post!

Want to join the discussion?
Feel free to contribute!